Cities and Forests: How They Co-Exist 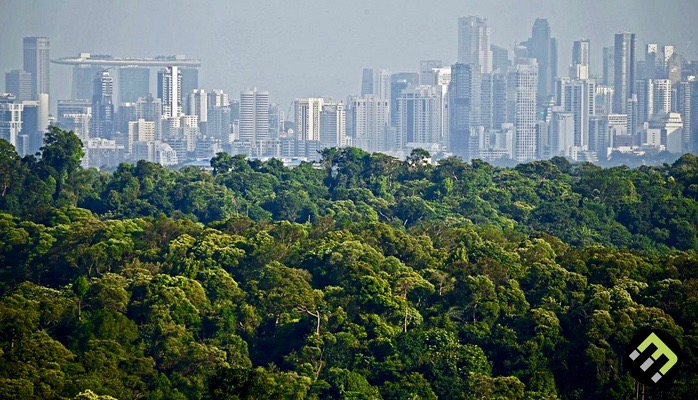 Cities and forests are often perceived as two separate entities, but the fact of the matter is that the two are interlinked, even co-dependent. Cities may be self-sufficient on the surface, but a massive amount of their resources (think cool wind, water supply, rainfall) directly take root from forests nearby. The city of the future (and the future of the city) is one that co-exists with forests, involving trees planted in predominantly urban areas and thick forest cover surrounding them.

Co-existence and environmental change are the needs of the hour, not least because over the last five years, the surfaces that don’t absorb rainwater have shot up while green surfaces within urban areas has dwindled at alarming rates. Cities will continue to expand, but to be considered sustainable, they will need to evolve.

Dependence of Cities on Trees

Before talking about forests, it’s important to talk about trees within cityscapes and urban forestry. Only then will the context (and the importance) of large-scale forests be thoroughly understood.

The quality of air in urban areas is no joke. Individual citizens have long taken to precautionary measures to save themselves from the pains of fine dust, smog and general pollution. In South Korea and Japan, it’s not uncommon to see people wearing surgical or filter masks on the streets– the number only increases when the governments send out fine dust alerts.

Urban vegetation absorbs gases in the air. This improves air quality and improves the respiratory health of inhabitants. While standard removal rates differ based on the tree species, larger healthy trees have the potential to remove 70 times more air pollution than smaller trees or sapling1. This also makes a case for conservation of current urban vegetation, as tree planting take years to mature and reach their full pollution removal potential.

Tree planting can invariably bring down temperatures in urban areas, especially in summers. By offsetting the CO2 content in the air, tree covers reduce the ‘greenhouse effect’ and bring in cooling winds that bring down temperatures. Naturally, the shade and moisture provided aids in further reducing degrees on the thermostat, so it’s win-win. As temperatures drop, noxious gases are less likely to hover in the air, which decreases the effect on the ozone layer.

Scientifically speaking, there’s so much that trees can do for cities by virtue of just being planted and allowed to grow to full size and in good health.

Multiply these positive effects two-fold, maybe ten-fold, and it’s not hard to see why forests are considered the lungs of the planet.

Dependence of Cities on Forests

Making a case for the co-existence of forests and cities warrants an explanation of how cities depend on forests, despite how independent they seem at face value. For some, this may be a throwback to elementary school science classes– but going back to the basics may well help the world realise that naïveté when it comes to understanding just how much cities depend on forests will not sustain for very long.

The greenery of a city’s surrounding area directly impacts the city’s water supply. Forests regulate the natural supply of clean water as the canopy triggers the release of water vapour that in turn maintains precipitation. Since roots of forests trees are largely strong and healthy, they shelter the soil from heavy erosion and this also facilitates an increase in groundwater. The same strong roots filter sediments and chemicals, making for a higher-quality supply of water.

Humankind has long been dependent on forests for naturally available food and nutrition. Although our attempts at food gathering are miles more advanced than they were in the crude ages, there’s no doubt that one of the ultimate sources of this food is forests, the other being water. Food, in this case, could mean wildlife, fruits, nuts, berries and bark.

Reduces the chances of floods and landslides

As storm management goes, trees are by far the most critical natural managers of storm water. Strong trees effectively waylay runoff at least temporarily, taking the load off human-made storm water systems that aren’t built for intense flood situations. The logic behind this is simple– forests require a lot of water to grow. Naturally, that in itself thwarts the flow of water, giving it enough and more time to be soaked up by roots or bleed into the soil to become groundwater.

Deforesting on a massive scale and cutting down swathes of trees can only result in disastrous consequences, including flooding. No part of the world has had it as bad as Indonesia or Peru, where watershed was converted into agricultural land, causing overflowing river water to inundate cities and wreck homes in its wake.

Climate change is largely caused by the unrestricted emissions of CO2 into the atmosphere– the very element that trees absorb to produce more oxygen. It’s easy enough to make the correlation here. Global reforestation and current forest cover conservation are the only quickest, most plausible ways to reduce the effect of CO2 emissions and slow down the impact of climate change.

Tree planting and conservation is a buyer of time– the world still needs quicker, faster, more scalable solutions to climate change. But protecting forest cover around cities can offset their carbon emissions, bringing into the picture some semblance of balance, however fragile.

Cities will continue to expand as population increases and more and more people move from rural to urban areas. The ‘big city syndrome’, a feature of which is uneven ecosystems, is a high risk at this point. Cities are increasingly becoming concrete jungles while the real jungles make way for agricultural production to feed their population.

The need for futuristic, sustainable cities

By 2030, the world will have 43 megacities, each with 10 million inhabitants2. This rapid rate of growth only spells danger for these inhabitants if sustainable measures aren’t taken to balance out resources and demand. In line with this are the rapid rates of deforestation for agribusiness or of natural causes– decreasing forests could result in catastrophic effects on the cities of today.

Both the United Nations’ Sustainable Development Goals and the New Urban Agenda acknowledge the role of cities in sustainable development3. It only makes sense that they spearhead local action, considering they are responsible for more than 70% of greenhouse gases4. A significant number, for a setup that occupies only 2% of the world’s total land5.

The need for a new game plan is entirely obvious– as people crowd cities, air quality drops, green spaces shrink, roads become dangerous, housing prices rise and public transport is overwhelmed. As if in retaliation, neighbourhoods across the globe are being wiped out in a flash due to floods, lightning strikes and wildfires of disastrous proportions.

Governments and private are pledging to work towards afforestation and restoring forest cover, and tree planting firms, including EcoMatcher, are efficiently helping these entities reach their sustainable development goals without having to instate in-house teams or bring economic progress to a halt. EcoMatcher does this by collaborating with vetted partner who not only plant trees and forests, but ensure they’re looked after and allowed to grow to their full potential. Similar stories emerge from other corners of the world, too– a testament to how economically viable it is to adapt and transform cities into sustainable entities, and to allow natural forests to remain as is for posterity.